Continuing with my Docker for Noobs series, in the Part 2, I would give an insight into the Docker editions available and installation of Docker on your local machine.

As highlighted the Part 1 of this series, Docker was a proprietary technology which was made Open Source in 2013. After opening this to the community, Docker is offered now as 2 versions-

As the name states, this version of Docker is a community edition and is ideal for developers and small teams. The Docker Community Edition is available free to download and can be setup across all popular OS platforms. This edition comprises of all core features of Docker which are good enough for development purposes and regular deployments. Docker stacks optimised for cloud platforms like AWS and Azure are available as well for download and setup.

Docker Community Edition is also available by Docker themselves in Cloud that offers additional management capabilities via an intuitive Web UI.

More details on Docker Community Edition can be read here.

Again, as the name states, Docker Enterprise Edition is best suited for enterprises that want to leverage the power of Docker along with agility and security. This version provides better insights with analytics and reporting to manage your Docker environment. It also comes with added security features which are critical for larger organisations. Not to forget, Enterprise Edition comes with dedicated support and services directly from Docker and you don’t have to rely on the community forums and support for troubleshooting.

More details on Docker Enterprise Edition can be found either by running their Trial version or contacting the Sales Staff.

For this tutorial series, I would take up Docker Community Edition as the Docker Edition of choice and will use Mac OSX as the target platform. Details on installations on all the OS platforms can be found out here.

The community edition installer for MacOSX is available on this URL for download.

Run the Docker installer for Mac OSX and follow the steps.

Once the installation is complete, you would see Docker icon in the Status Bar. It has several options that one can explore and setup. 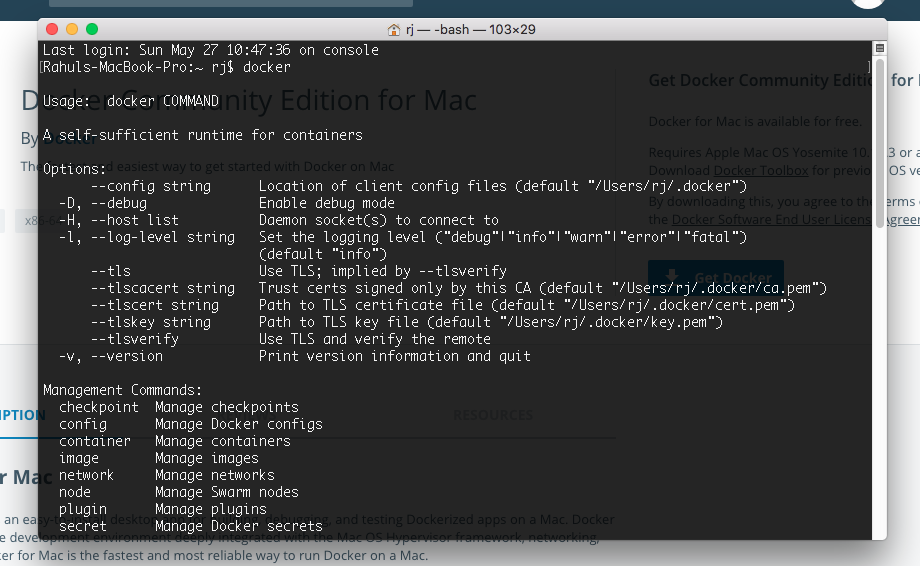 Finally, in order to verify your Docker installation, you can go to the Terminal and type docker. This would list out the details about usage of Docker command, and hence confirms that Docker has been installed successfully.

With this, we get to the end of our part of the series. As now we have setup Docker and it is running, in next part we would explore some Docker commands to get a feel of how Docker works and what it has to offer.